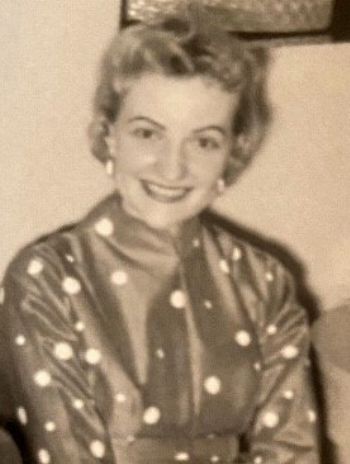 Leona "Lee" (nee Wasik) Bruzzini, of Huntley, died on March 18, 2020.
Leona was born on November 5, 1930 in Chicago to parents John and Marie (nee Ochab) Wasik.
Leona loved and doted on her family. On April 18, 1953 Leona married the love of her life, Carl. Together they had three children, 9 grandchildren, and 3 great-grandchildren.
She is survived by her husband, Carl, her children, Joyce (Frank Hill) Mariano, Carl (Maureen) Bruzzini, and Laurie (Spero) Manusos, her grandchildren, Brenden, Vincent (fiancee Alexandra), Craig, Ashley (Dominic), Joseph, Caitlin, Erica (Patrick), Shayna, and JT, her great-grandchildren Addison, Theo, and Liam, and her brother Richard Wasik.
She is predeceased by her sister-in-law, Arlene Wasik.
No services are planned at this time.
For further information please call the funeral home at 847-515-8772 or online condolences may be directed to www.defiorefuneral.com

Condolences (7)
Please take at least 10 seconds before clicking Submit to confirm the validity of the condolence.

Sending love to my family at this very sad time. Auntie Lee was a beautiful soul inside and out. She will be missed.

My love and heartfelt prayers go to my friend Joyce and her family during this difficult time. May our Lord comfort you all, in the way that only He can. I am so sorry for your loss.

Our deepest sympathy to Joyce and the rest of her family. Our thoughts and prayers are with you all at this difficult time.

Love and prayers to you and your family. So sorry for your loss.

I am deeply sorry for your loss, my thoughts And prayers are with you.

I am so very sorry for your loss! My condolences are with you all during this time. Please reach out if I can so something for you guys! Hugs & Love to you all!

Joyce, I was so sorry to hear of your mother’s passing. How difficult this is under normal circumstances, but now we can’t get together to hug and share our grief. Will keep you in my prayers.