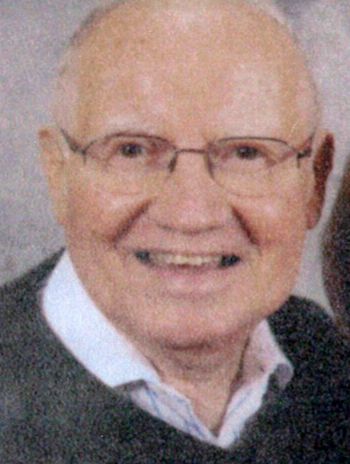 Ramon (Ray) J. Ragusa, 85 of Huntley, died peacefully, November 18, 2019.
Visitation will be on Sunday, November 24, 2019 from 2-6pm at DeFiore Funeral Home-10763 Dundee Road, Huntley. A funeral Mass will be celebrated on Monday at 10:00am with visitation from 9:00am until the time of Mass all at St. Mary Catholic Church-10307 Dundee Road, Huntley. Entombment will be private.
Ray was born August 7, 1934 in Chicago the son of Salvatore and Virginia Ragusa. On September 24, 1960, he married Loretta Vollmann. He worked for A. Finkl and Sons Co. for 40 years. Ray was a hard working man and enjoyed time in Wisconsin, skeet shooting and boating. After his retirement he and Loretta enjoyed traveling. He was a devoted husband, father, papa and friend who will be missed by all who knew him.
He is survived by his wife, Loretta, his children, Joseph Ragusa, Gerard (Kimberly) Ragusa, Therese (Robert) Speer and Nicole (Erik) Higgins, by his 7 grandchildren, Catie, Michael, Margaret, Kathleen, Kevin, Tristan and Nicklaus.
He was preceded in death by his parents and by his brother, Carmi.
In lieu of flowers, memorials can be made to Masses or to St. Jude's Children Research.
For further information please call the funeral home at 847-515-8772 or on-line condolences may be directed to www.defiorefuneral.com

Sad to hear that Ray has passed away. Such a dear long time friend of our family. My dad will look back on many years of good times and friendship with him. He will be missed.

Our condolences to the entire Ragusa Family. We always enjoined Ray and Lorie stopping to visit us in Placitas NM on their way to Arizona. We shared outings, shopping, dinners and Vollmann Family stories. We sure are going to miss Ray and his E-mail notes. May Our Lord open his arms and let his perpetual light shine brightly upon you Ray! God Bless

I'm sorry this is late, but I just heard about Ray's passing. I always enjoyed working with Ray, and was touched that he always stopped by to see me after he retired. RIP