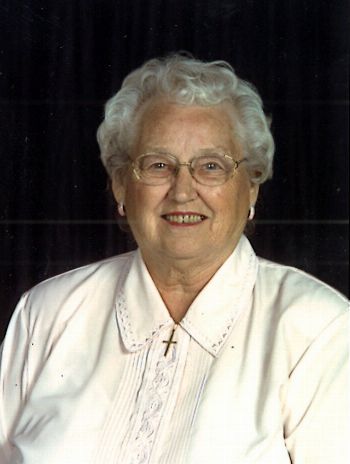 Elmina J. Richardson (nee Olson) 92 of Homewood, Illinois passed away at her daughter’s home peacefully.
Elmina was formally from the Elgin area. She was a member of the Country Covenant Church and was a life-time member of the Hampshire VFW Auxiliary.
Elmina was born in Cabery, Illinois the daughter of Gertrude and Harley Olson. She lived with the Marlowe’s in Huntley when she was sixteen. She worked at the Hatchery Store and attended Huntley High School. Elmina graduated in 1945 and married Donald G. Richardson on June 24, 1945. They were married for 54 years. She worked for A & P Store for 27 years before retiring. She was preceded in death by her husband Donald, and her son Glen and by her parents Gertrude and Harley. By her sister, Rose Aldrich, 4 brothers, George, Harley, Giles, and Rodger.
She is survived by two brothers, Oliver and Elmer (Anna Mae), by her two daughters, Ginger (Keith) Willing, Gail (Edward) Bove III. She is survived by eight grandchildren, Cynthia (Gary) Mielke, Paula Pierce, Keith (Michele) Willing, Rebecca (Matthew) Garcia, Dawn (Kenneth) Morris, Jaime (Kristofer) Van Horn, Edward ( Amanda) Bove IV, Eric Bove, 17 great grandchildren, 6 great great grandchildren.
Visitation will be on January 11, 2020 from 8:30am until the service at 10:30am all at DeFiore Funeral Home-10763 Dundee Road, Huntley, Illinois. In lieu of flowers donations may be directed to Country Covenant Church or please donated blood to the Red Cross in her honor.
For further information please call the funeral home at 847-515-8772 or on line condolences may be directed to www.defiorefuneral.com

We will miss her.

Elmina was a wonderful friend to me and everyone that knew her. Elmina was the best Christian I have ever known. Thanks Gail, for taking such good care of her. Love, Verna Homewood