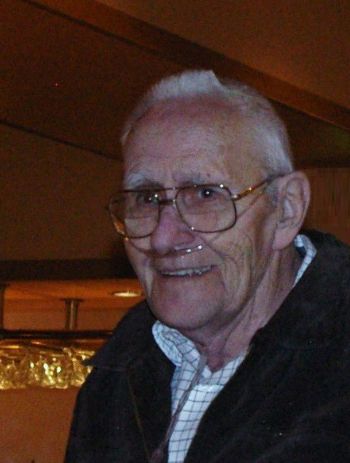 Richard (“Dick”) Dean Hranac was born November 13, 1929 in Emmett, Idaho. He moved from Carpentersville to Huntley, IL in 2003 and passed away at Highland Oaks in Elgin, IL on November 3, 2019. His childhood was spent in Emmett with his parents, Nellie and Sylvester (“Tye”) Hranac, and several brothers and sisters. He and his twin, Robert, were the youngest; they both withdrew from high school as soon as the United States Army would accept them, and Richard served in the United States Army from 1946-1949, primarily in the United States Occupation of Japan.
In the fall of 1949 he met Rose Aldridge in Montgomery, Alabama while stationed at Maxwell Air Force Base. They were married in January of 1950, and within a few months moved to Chicago. Using the GI bill, he studied automotive mechanics at Greer in Chicago and then started two different business in Chicago: an automotive repair shop and a remodeling and construction business. In 1959 he and Rose and their three children: Helen, Robinette and Samual, moved to Carpentersville; in 1963 he was divorced. In 1966 he married Maylo Beil at the Palatine Methodist Church, and their family continued living in Carpentersville until 2003 when they moved to Huntley.
In 1968 he returned to school, completing a GED in 1968, an associate degree from Elgin Community College in 1973, a B.S. in Educ. from Northern IL University in 1975, a Master of Science in Technology from Northern IL University in 1979. He had started a master’s program in counseling when he retired. With over 25 years of experience as an automotive and truck mechanic, he taught and coordinated the automotive technology program at McHenry County Community College from 1976-1991. While at MCC he started an auto club where students learned about engine performance by racing “The Vegord” at the Great Lakes Dragway in Union Grove, WI. After his retirement from college teaching, he worked as a shipping clerk for Bucher International and later as a substitute teacher in early childhood and special needs classrooms in School District 300.
His hobbies were diverse. He applied the carpentry skills he had learned from his father, and remodeled and added additions to each of his own homes and his son’s home, and he completed several carpentry projects and building renovations at his church in West Dundee. He enjoyed woodworking, quilting, reading, traveling with his wife and visiting his children, grandchildren, nieces and nephews most of whom live in the Pacific Northwest. Together they visited 50 states, cruised the islands of the South Pacific, New Zealand and Australia, and made multiple trips to Alaska, Hawaii and to Europe. They were able to find the small village his grandparents left in the 1890s, once Bohemia, now part of the Czech Republic. In the beginning of their marriage they camped, and in later years they cruised.
He was a member of the First United Methodist Church of West Dundee for 49 years and at different times served as trustee, choir member, junior-high youth director, Sunday school teacher, VBS teacher, member of both stewardship and education committees, and an actor in three fundraising plays. At the time of his death he was a member of the Illinois Retired Teachers, the Huntley chapter of the American Legion and Christ United Methodist Church of Algonquin.
He is survived by his wife, Maylo Hranac, all of his children: Helen Rajala of Arvada, CO; Robinette Szczepanski (Robert) of Twin Lakes, WI and Samual Hranac (Cheryl Kordick) of Seattle, WA; five grandchildren: Corie Rajala, Justin Rajala, Ian Rajala, Ty Hranac and Milena Hranac, and five great-grandchildren: Rebecca and Sven Schoedel, Kairi and Lili Rajala, and Evelyn Rajala born shortly after his death.
His parents, Nellie and Sylvester Hranac; his first wife, Rose Gregg, and all his sisters and brothers preceded him in death: Evalyn Williams, Frances Wiley, Margaret Hazelgove, Hazel Alsup, Donald Graham, Douglas Graham, George Graham, Laura Slover and Robert Hranac.
A memorial service will be held at Christ United Methodist Church in Algonquin, 9009 W. Algonquin Road on Saturday, March 28, 2020. A visitation is scheduled from 11:30 to 1:00, and the service will begin at 1:00. Dick’s body was donated to medical research. Memorials have been established in his memory at the Ponseti International Society for Club Foot (provides training to doctors in third world countries), First United Methodist Church of West Dundee, IL and Christ United Methodist Church of Algonquin, IL. The DeFiore Funeral Home (847 515 8772) is overseeing the arrangements.

Uncle Dick was one in a million. He is missed by so many. He was my god father and always made me feel special. I think about him and miss him so often. Maylo, I truly sorry for your great loss.

I did not know Dick well, but I do have fond thirty-year-old memories of him corralling and entertaining all the little children, and completely charming my daughter at the Wednesday night church suppers in Dundee.

Having known Dick as a fellow educator, spouse of a colleague and parent of a student, I was fortunate to be able to observe him in many roles. His integrity, caring and humor are characteristics that I shall always remember. My deepest condolences to his entire family for his loss; may they feel blessed to be part of such a legacy.

Maylo I am so sorry for your loss my prayers are with you.

How wonderful....you managed to say so much so simply ....i always thought he had such a spirit and the will to succeed and to fight the good fight.,,,Going into the service was in my opinion a need to be whole and serve...And he did with success. Your entry into his life was my favorite .....He found another way to serve,,TEACH ,,,,This was what he was intend to do he just hadn't found it yet.... Your entry into our rather diverse family has been a positive influence and I appreciate it. THERE IS A SONG ,,,WE ARE FAMILY.... AND YOU ARE AND ALWAYS WILL BE A PART..... Stay well and take care of your self....Janet