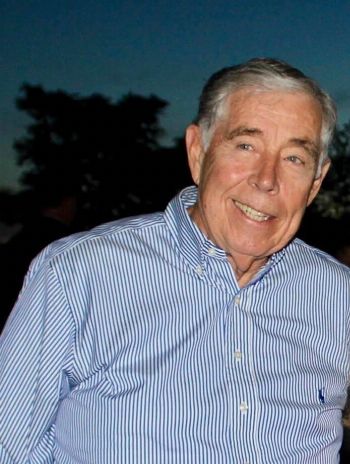 Charles N. Benner, 79, of Huntley, formerly of Buffalo Grove, died on July 26, 2020.
Charles was born on May 18th, 1941 in Chicago to parents Marion and Ruby (nee Hora) Benner. On September 14, 1963 Charles married Gail Gouzoules and together they raised three children. Charles was deeply devoted to his family and church and loved to spend time with his children and his grandchildren. He worked as a train engineer for 43 years (Metra) and founded Builders Cabinet in 1986 which is still in operation to this day. He is remembered for being very generous and a serial entrepreneur. He loved to travel and was most at home at their lake house in Tennessee spending his days with the grandchildren on the boat.
Charles is survived by his wife of 56 years, Gail Benner, his children, Jeffrey Benner, Brian (Cynthia) Benner, and Julie Dokter, his grandchildren, Austin, Grace, Kailey, Rachel, Zach, Kelsey, George, Christopher, Sam, Ana Luiz, and Nic, his siblings, Vernon Benner and Loreila (Vic) Franz, and his sister in law, Nancy Trussel.
He was preceded in death by his brother, Harold Benner, his son in law, Troy Dokter, and his sister in law, Ruth Benner.
Visitation will be on Friday, July 31, 2020 from 4pm to 7pm at DeFiore Funeral Home - 10763 Dundee Road, Huntley. Funeral will be on Saturday, August 1, 2020 at 1pm at DeFiore Funeral Home. Interment will immediately follow the service at Huntley Cemetery.
In lieu of flowers, memorials in Charles’s name can be made to Reaching Indians Ministries International https://rimi.org/
For further information please call the funeral home at 847-515-8772

Condolences (7)
Please take at least 10 seconds before clicking Submit to confirm the validity of the condolence.

We Will Deeply miss this special friend and partner. He impacted our lives and ministry beyond words. His legacy will live on. Deepest condolences to Gail, children and grand children.

As a Member of the Board of Directors of RIMI, I want to express my gratitude for the generosity shown by Charles for the spiritual education and prayer support of a vast number of Mission India's students and faculty. He leaves his family and friends to grieve for a season; that is appropriate. However, though he has entered into eternity with the Creator, his influence will continue a good work in India here on earth. He leaves a good legacy.

Dear Gail, Asking Papa God to wrap His loving arms around you and your precious family during Chuck’s “homegoing”. Sending blessings, hugs and love, always Lynne (Mackin) and Charles Brown

We are honored and blessed to have known Charles Benner for past 15 plus years. The library building at the seminary campus tells of his generosity and heart for Mission work. His investment in the kingdom of God will be remembered in the earth and also in the heaven. Our sincere condolences to Gail Benner and the entire household. May the peace of God be with you in this time of loss and grief.

It's hard to believe our dear friend and generous partner of Reaching Indians Ministries International and Empowered Poor, Inc. is no longer with us. His unmatched heart for missions and generosity has left an indelible impact and his legacy will continue forever. Our deepest condolences to Gail, children and grand children. We pray for God's peace and comfort.

I'm praying for you Gail, and your family. I extend my deepest sympathy over Chuck's passing. He was a wonderful husband, father, grandfather and friend. He will be dearly missed. Sending love and prayers!

We are at Camp Awana and heard that Chuck is now with the Lord. So many wonderful memories. He will be missed. Sending our love and will be praying for his family, especially Gail.