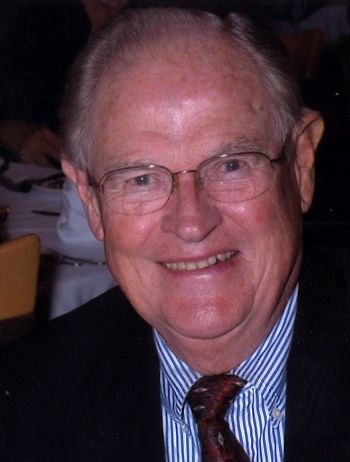 Russell Sterrett, 86 of Huntley, died September 8, 2020 at his home with his family by his side.
Private family services were held.
Russell was born May 25, 1934 in Chicago, Illinois the son of John and Amanda Sterrett. He grew up in Chicago, graduated from DePaul Academy. He had a love for baseball from a young age. He worked as a procurement specialist, a job he enjoyed and excelled at. He played for the Sultans, and later was the MVP of the Hurricanes of Sun City. He was a genealogy enthusiast, enjoyed traveling and was a master tinkerer and could fix anything. Russ was a gift to all who knew him. He will be missed.
He is survived by his wife, Betty, his children, Bob (Linda) Sterrett, Patti (Tom) Cripe, Bill (Rhonda) Sterrett, and Tom (Miki) Sterrett, Laura (Edward) Spore and David (Kathy) Jewell; 16 grandchildren, Michael, Megan and Matthew; Lauren, James and Matthew; John and Daniel; Kyle, Jena and Jessica; Samantha; Katie, Sarah and Jessica; David; 6 great grandchildren, Jacob, Evelyn and Margaret; Everett; Emma and Ellie, and by his daughter-in-law, Shannon and Son-in-law, Ken (Sonia) Mogensen and by many nieces and nephews.
Russ was preceded in death by his first wife, Anne, his children, Cindy and James, brother John and sister, Barbara.
For further information please call the funeral home at 847-515-8772 or on line condolences may be directed to www.defiorefuneral.com

Thank you for being so loving and caring! You will be forever appreciated for being such a great influence in my (and many) life.

I was very saddened to hear that Russell had passed away, Betty. My condolences to you and all your family. Love, Elsie

I was very saddened to hear that Russell had passed away, Betty. My condolences to you and all your family. Love, Elsie