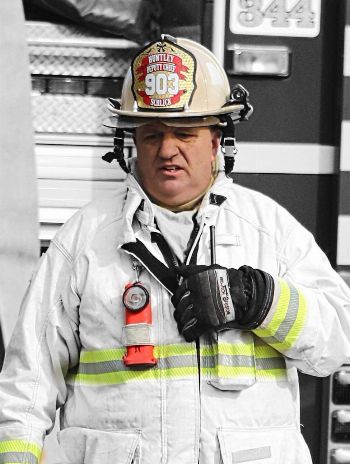 Albert W. Schlick, III, 53, of Huntley, died peacefully, January 5, 2021 at JourneyCare Hospice in Barrington with his family by his side.
A visitation will be held on Tuesday, January 12, 2021 from 4-8pm with a professional walk through starting at 6pm all at DeFiore Funeral Home-10763 Dundee Road, Huntley. A Funeral Mass will be celebrated on Wednesday, January 13, 2021 at St. Mary Catholic Church. The Funeral Mass will be lived streamed by going to St. Mary Catholic Church Huntley on YouTube the live stream will begin at 10:00am. In lieu of flowers memorials may be directed to Huntley Animal House Shelter.
Albert was born December 12, 1968 in Elgin, Illinois the son of Albert W. and Sandra Schlick. He was the first member of his family to start a career in fire service. Chief Schlick began his career as a paid-on-call firefighter with Wauconda Fire Department in November of 1987. He transitioned to a full-time position in June of 1991 rising through the ranks to Division Chief of Training. Chief Schlick retired from Wauconda in July of 2015. From there he served as Deputy Chief with the Huntley Fire District. Chief Schlick made everyone around him a better person. His passion, love, and knowledge of the fire service is what made him a mentor to so many. Chief Schlick had the ability to see the potential in people entering the fire service and help them achieve their best potential. His advice was sought out by young and old across this great nation.

He is survived by his brother, Adam (Kristen) Schlick, sisters, Kelly Schlick, and Lindsey Schlick, by his nephews, Hunter, Cole, and niece, Madison and by his former wife, Patricia Schlick.
Al was preceded in death by his parents.
For further information please call the funeral home at 847-515-8772 or online condolences may be directed to www.defiorefuneral.com

Condolences (8)
Please take at least 10 seconds before clicking Submit to confirm the validity of the condolence.

A great man who lived and breathed the fire service. Al touched so many firefighters lives, passing on his knowledge. He will be missed.

Al it’s still hard to believe that you’re not here with us anymore. You helped so many of us, including myself. You probably don’t even have an idea of all that you helped. I will miss the conversations and dialogue we had and will do my part to never forget you or what you did for this job and to help me personally.

So sorry to hear about Al’s passing. His suffering is over

Not usually speechless...so I’ll go with what a loss of an incredible person...RIP Lil Al♥️

I know words can’t take away the hurt you’re feeling with the loss of Al, but I want you to know how much I care. Sending you love and strength in this time of loss.

I want to send my heartfelt condolences to Huntley and Wauconda Fire Protection Districts from the staff and members of the Illinois Society of Fire Service Instructors on Al's passing. Al was and will remain an inspiration to all of his Illinois' sisters and brothers in service but the nation as well. Al is one of the "good guys" and he will be missed. I won't have anyone to argue about JPR's and IDOL requirements with or at least with as much energy as Al. Rest in Peace, my friend. The Illinois Society of Fire Service Instructors and a grateful friend.

Al...you were the best of the best!! Truly a great man, a great friend, and a great mentor. We will miss you deeply!! From the time I met you when I was brand new in the fire service, you were always a friend that would help in an instant. I can never thank you enough for everything you did for me as a firefighter and in my personal life. I will miss your dedication to the fire service, the conversations we would have, the jokes, and most of all; you as a friend. Sadness doesn't even come close right now. We lost a great man and friend to all of us. Rest easy my friend and thank you.

May you find peace in your next adventure cousin. Much love to you and the family. ❤