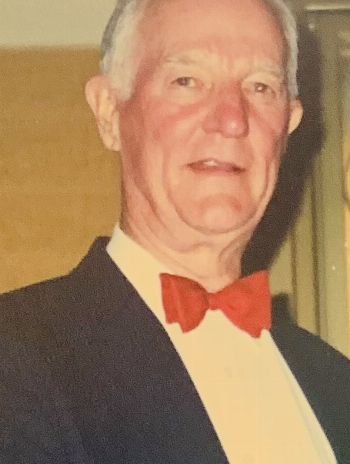 Warren was preceded in death by his first wife of 53 years, Loe, and his son, Charlie (Karen).

Warren was born August 8, 1924, in Kenosha, WI. He attended Cornell University in Ithaca, New York, on a McMullen Scholarship in mechanical engineering.

During WWII he co-piloted B-29s based out of Tinian Island in the Pacific Corridor, where he and his crew were awarded the Distinguished Flying Cross. During his Air Force career, Lt. Higgins was also awarded the Air Medal with three oak leaf clusters.

Warren spent his executive career in engineering and manufacturing at three companies serving the electrical, beverage, and agricultural industries. He retired in 1986 as vice president and general manager at the Deutz-Allis Company in Independence, MO.

Warren married Loe Jane Smith in 1946 and had four children: Rob, Ris, Charlie, and Barb. After Loe’s death in 1999, he renewed a friendship with a long-standing family friend, Maxine Murphy, and they married in 2001. That marriage expanded his family by three more children—Scott, Brian, and Mara.

Warren lived an extraordinary life—ever teaching love and family first, sharing wisdom, and modeling patriotism. He was devoted to his Sixth Bomb Group WWII brothers and their reunions with the Lucky Strike and Reamatroid B-29 flight crews. Warren was also an active Rotarian since 1957, served on bank and hospital boards, and started a foundation in his perennial spirit of giving back to each of the communities in which he lived.

Warren’s faith was important to him; he was a devout Catholic and active in his church.

Upon his retirement, he was gifted a Santa Claus suit and delighted in handing out candy canes to everyone. On many Veterans Days, he volunteered at schools, representing WWII vets to answer questions and share stories. In addition, he celebrated Presidents Day visiting local schools and dressing as Abraham Lincoln, sporting a black top hat, dying his white hair black, and talking with kids about Lincoln. He then passed out Lincoln head pennies to each student.

One of his favorite legacies was his role as grandpa. Upon the birth of each grandchild, Warren cross-stitched an heirloom-quality quilt as a gift. His other grandpa legacy was to take each grandchild on the trip of their choice with him once they reached age 18.

He kept his life vital, which added to all of ours. Whenever he spoke to community groups, he handed out his card with the title American Patriot and Veteran. When done, he sang his own rendition of God Bless America.

In lieu of flowers, memorials in Warren's name can be made to the Wounded Warrior Project https://www.woundedwarriorproject.org/ and the Rotary Club of Huntley https://portal.clubrunner.ca/2382/sitepage/about-our-club/rotary-club-of-huntley

Warren led a long and extraordinary life. He had a lot of joy and enthusiasm along with his wisdom and strength. He will be missed by all who knew him.

My heart goes out to all the family and loved ones during the time of grieving. He was smart, joyful and a friend to all. I pay my respects to this amazing man, and to the family.

So sorry for your loss. He was a wonderful person, neighbor & friend.

So sorry for your loss. He was a wonderful person, neighbor & friend.

Our entire family is keeping your family in our thoughts and prayers. Uncle Warren was our dad's younger brother. My sisters, Ann, Jeannie and Kay all have fond memories of Uncle Warren. He was truly larger than life and had a fun and gregarious personality. I am so happy that my sister Jeannie and I were able to visit he and Max a few years ago. He will be greatly missed by all.