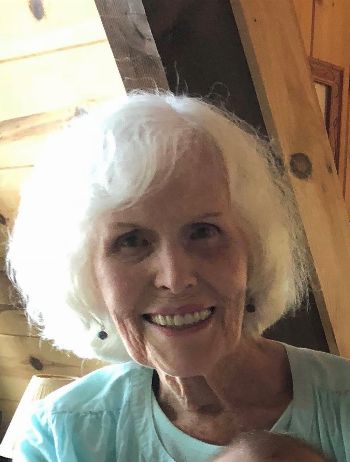 Colleen Nancy Dowell, 89, of Huntley, died peacefully on Sunday, April 25, 2021.
Colleen was born on February 14, 1932, in Chicago to parents John and Edna Mae (nee Bobzien) Kelly. Her father was a Chicago policeman and she was raised on the northwest side of the city. Colleen loved the Northwoods of WI and spent her summers with brothers Jack and Mike and many cousins, in Woodruff, WI at Brandy Lake. She loved synchronized swimming and every animal she came in contact with. Colleen was a 1954 graduate of the University of Wisconsin, Eau Claire. She was also a fourth-grade teacher at Fairview Elementary School in Mt. Prospect, IL. After Colleen and Rusty married in 1957 they started their lives together in Hoffman Estates, IL, and later moved to Arlington Heights, IL where they raised two devoted sons, Randy Russell, 61, and Rick Russell, 56. Colleen and Rusty enjoyed their entire summers with their two boys and many friends and family at their summer home in Boulder Junction, WI. In their retirement years, they moved to Algonquin and later Huntley, IL where they continued their visits to the Northwoods in Boulder Junction, WI. Colleen was a talented artist and loved to paint pictures of her grandchildren and landscapes of their property up north. As fun-loving grandparents, they were always supportive of their grandchildren, Lauren, Jonathan, Chris, Holly, Alyssa, and Logan, and great-grandson Carson. Many times, they could be found cheering the kids on at horse shows, ice rinks, track fields, airports, art shows, you name it!

Visitation will be Saturday, May 1, 2021 from 9 a.m. to 11 a.m. at DeFiore Funeral Home, 10763 Dundee Road, Huntley.
In lieu of flowers, donations may be made to the Alzheimer’s Association www.alz.org
For further information please call the funeral home at 847-515-8772 or on line condolences may be directed to www.defiorefuneral.com

Dear Dowell family, I am very sorry for your loss. You guys are in my heart and prayers. I love you.

Dear Dowell family, I am very sorry to hear about the passing of your wife, Mom and grandma. She will be always in your thoughts and memories hold them dear in your hearts. Thoughts and prayers are with you all. Love the Ellis family.

Colleen was a kind lady who I admired for having raised two wonderful sons along with her husband, Rusty. I always enjoyed our talks when we gathered for family celebrations.

Rusty, I wish we could be with you during this time. It's never easy to say goodby to someone you love. Colleen was the one who kept us together in Wisconsin, and we will all miss her. If there is anything we can do for you or the boys please reach out. Don wanted to come in the worst way, but he is in a wheelchair now and cannot travel.