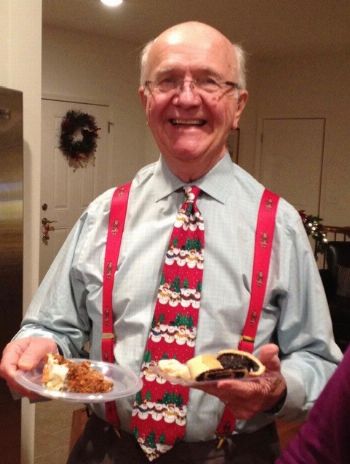 Jim Darow, 86, of Huntley, IL for 20 years, passed away April 24, 2021. Jim was born May 4, 1934 to the late Stanley and Anna Dziedzic (Thomas) in Chicago, Illinois. After graduating from Weber High School, he went on to DePaul University and graduated with a bachelor’s degree in Political Science. He then began his political career journey at DePaul’s Law School, while working full-time and having their first son (James Robert) with his loving wife of almost 66 years, Elizabeth Ann Poltzer. Jim and Elizabeth met for the first time when Jim was her accordion teacher.
Jim has two brothers, Jerome (Patricia) Darow and Father Robert Darow. He was an exceptionally proud father of James (DeAnn) Darow, Susan (Sara Gotheridge) Darow, Christine (Robert) Straszewski and Mary Lou Darow. Jim has ten grandchildren, Margaret (Jake) Geimer, Emily (Brandon) Porter, John Straszewski, Elisabeth Darow, Karlee Darow, Isabella Jaeger, Christopher Jaeger, Holly Darow, Eva Darow, and Joseph Jaeger. He also has two great-grandchildren, Finn Geimer and Roderick Geimer.
With his passion and strong interest for local politics, Jim was a Park District Board Commissioner and board member in Norridge for several years. Later in life, he wrote many editorial columns for local newspapers and was unafraid of fighting for what he believed in by telling the truth about what was going on in his Del Webb community and surrounding area. He had unwavering curiosity and was always respectful of both sides of the story. Jim was passionate about many topics, and reflective. He enjoyed playing tennis, pickle ball and bocce ball for many years. Together, in mid-life, Jim and Betty learned to swim at the Leaning Tower YMCA in Niles, IL and that sport became a strong, shared interest for every member of the Darow family. Jim could be downright silly, too. After all, only Jim would proudly walk into his last adult beginners swimming class wearing a cap and gown, large fins, and a snorkel.
Visitation for Jim will be held on Sunday, May 23, 2021 from 2:00 to 4:00pm at DeFiore Funeral Home-10763 Dundee Road, Huntley, IL.
In memory of Jim flowers are accepted or donations to Kenosha Special Olympics Wisconsin
For further information please call the funeral home at 847515-8772 or on-line condolences may be directed to www.defiorefuneral.com

We send our prayers that GOD will give the entire family comfort and peace . Remember the good times Please accept our sympathy Paula Jones and family

Adrienne and I will miss Jim, especially seeing him in the pool. Great gentleman. May Betty and his family find peace at this difficult time. Sending our sympathy and prayers.

So sorry for your loss. Sending prayers and May he Rest In Peace.

I was in shock today when I read about Jim's passing away. He was a hero to me: intelligent, ally, friend, supporter, and a good listener. He believed in me and that meant a lot. He and I would become so angry when we attended our local township meetings as we witnessed confusion, lack of preparedness of many of the Trustees before a meeting, and so much more. I will be at his memorial crying as I lost a really good friend.

Jim will be missed by many of the residents in Sun City. Talking with Jim on many subjects opened my mind to many view points. Loved his probing questions, and his opinions. My sincere sympathy to his family and friends.

As a resident of Sun City for 14 years, I did not "know" Jim but I certainly knew "of" him and respected/admired the care he took in presenting his observations, criticisms, suggestions, and accolades both orally at meetings and in print. How refreshing to hear and/or read organized thoughts supported by facts and statistics, and sources. His "watchdog" eyes and ears will be missed by Sun City residents. Congratulations on the picture you opted for his obit. It captures the man I imagine he was just perfectly. May the family have joy as you remember him.