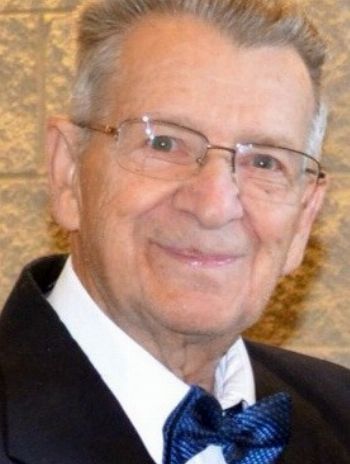 Gerald J. Mellenthin passed away peacefully in his Lake in The Hills home on August 28, 2021. He was born on February 23, 1929 in Chicago, Illinois. He was married for 70 years to the love of his life, Diana (Parenti) Mellenthin who survives him. He is also a loving father survived by his children Laura (Tom) Bookler, Ted (Deidre) Mellenthin, Joe (Janet) Mellenthin, and Mary Mellenthin. Grandfather of Ryan (Traci) Bookler, Michelle (James) Dipping and Marissa Mellenthin. Great-grandfather of Kyle and Krista Dipping, Benjamin, Ethan, and Hannah Bookler. Uncle to many nieces and nephews. A devoted son of the late Theodore Sr. and Leonora (Mapes) Mellenthin. Brother of the late Anna (Joseph) Fijak, Margaretta (Nicholas) Stanfar, Theodore Jr (Helen) Mellenthin, John (Patricia) Mellenthin, William (survived by Marlene) Mellenthin, and Thomas Mellenthin.
Gerald was a Korean War Army Veteran. He was a retired Data Processing Professor and Computer Information System Coordinator at William Rainey Harper College for 25 years. A graduate of St. Michael Central High School (1947), Bachelor Degree at DePaul University (1956), MBA at Northern Illinois University (1977). A former member of the DPMA which is currently called Association of Information Technology Professional so he could obtain full time employment for his students when he was the coordinator of the Data Processing department at William Rainey Harper College. Gerald was a member of the Knights of Columbus for 74 years, and a member of the American Legion for over 50 years. In his retirement he became a “snowbird” and a part time employee at Walt Disney World during the Chicagoland winter months for 9 years. When back home in Illinois, he and his beloved wife joined the Huntley Sun City Prairie Singer where they sang, danced, and acted in plays as well as worked behind the scenes. Some of the many activities Gerald enjoyed was fishing, trailer camping, gardening, reading, swimming, singing in the church choir, wood working, dancing, spending time with friends, and traveling with his wife and children.
The visitation is on Friday, September 10th, 4pm – 7pm at DeFiorie Funeral Home, 10763 Dundee Rd, Huntley, IL 60142. The church service is on Saturday, September 11th, 10:00am at St. Mary Catholic Church, 10307 Dundee Rd, Huntley, IL 60142. The funeral Mass will be live streamed and will begin at 10:00am https://www.facebook.com/defiorefuneral/
In lieu of flowers memorials may be directed to Dementia Society of America (www.DementiaSociety.org/donate)

May he rest in peace, no more worries!

We are Sincerely saddened by your loss.

Jerry was a great and loving person. I was in choir with him and his wife. So sorry,

So sorry for your loss. Jerry was truly a special person; so kind and compassionate. He always made you feel welcomed and loved no matter what the situation was.

Condolences to Mrs. Mellenthin Mary & Ted and the entire family. After reading the loving Obituary it is clear how accomplished this amazing Man was. God Bless

Dear Mrs.Mellenthin I am very sorry on the loss of Mr.Mellenthin. I had not been to the service due to emergency surgery. I have many fond memories of being with him as my teacher at Harper College. My mom sends her condolences also along with Maile.