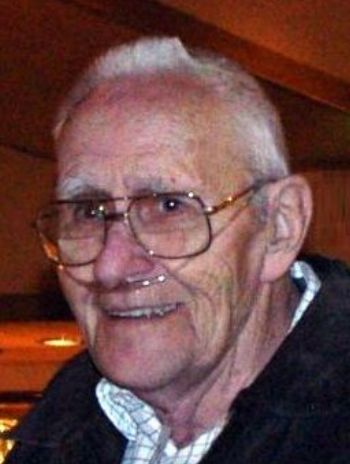 A memorial service for Richard Dean Hranac will be held on Sunday, September 19, 2021, at Christ United Methodist Church, 9009 Algonquin Road, Algonquin. The visitation begins at 1:00 p.m. and the service at 2:00 p.m. This church is next to the Huntley Fire Department, Station 4, and access is via an unnamed frontage road at Square Barn Road and Algonquin Road. Monday, September 20, 2021, there will be a short service at Windridge Cemetery, 7014 S Rawson Bridge Road, Cary. Visitation at Windridge begins at 10:30 a.m. at the administrative building with military honors, cremains scattering and tree planting at 11:00 a.m. He passed away on November 3, 2019, at Highland Oaks, Elgin, IL, but the service once scheduled for March of 2020 was postponed because of Covid.

Richard, known as Dick, was born November 13, 1929, in Emmett, Idaho and he lived with his parents Nellie (Young) and Sylvester Hranac and several older siblings until he withdrew from high school to join the United States Army. Weeks after his 17th birthday, he enlisted and served from December 31, 1946, to December 30, 1949, primarily in the United States Occupation of Japan.

While stationed at Maxwell Air Force Base in Montgomery, Alabama, he met Rose Aldridge in the fall of 1949. They were married in January of 1950, and within a few months moved to Chicago. He and Rose and their three children moved to Carpentersville in 1960 and were divorced in 1963. In 1966 he married Maylo Beil at the Palatine Methodist Church, and the family continued living in Carpentersville until 2003 when he and Maylo, both retired, moved to Huntley.
In 1968 he returned to school, completing a GED, an associate degree from Elgin Community College, a B.S. in Educ from Northern IL University, and a Master of Science in Technology from Northern IL University. With over 25 years of experience as an automotive and truck mechanic, he taught and coordinated the automotive technology program at McHenry County Community College from 1976-1991. While at MCC he started an auto club where students learned about engine performance by racing “The Vegord” at the Great Lakes Dragway in Union Grove, WI. After his retirement from college teaching, he worked as a shipping clerk for Bucher International and later as a substitute teacher in early childhood and special needs classrooms in School District 300.
His hobbies were diverse. He applied the carpentry skills he had learned from his father and remodeled and added additions to each of his own homes, his son’s home, and several carpentry projects and renovations at his church in West Dundee. He enjoyed woodworking, quilting, reading, traveling with his wife and visiting his extended family most of whom live in the Pacific Northwest. Dick and Maylo visited 50 states, cruised the islands of the South Pacific, New Zealand and Australia, and made multiple trips to Alaska, Hawaii and to Europe. Perhaps his most remarkable trip was in 2000, when he and Maylo visited the Czech Republic, met many paternal cousins, and found the ancestral villages of both of his paternal grandparents.
He is survived by his wife Maylo, all of his children: Helen Rajala of Arvada, CO; Robinette Szczepanski (Robert) of Twin Lakes, WI and Samual Hranac (Cheryl Kordick) of Seattle, WA; five grandchildren: Corie Rajala, Justin Rajala, Ian Rajala, Ty Hranac and Milena Hranac, and five great-grandchildren: Rebecca and Sven Schoedel, Kairi and Lili Rajala, and Evelyn Rajala born shortly after his death. His parents, Nellie and Sylvester Hranac; his first wife, Rose Gregg, and all his sisters and brothers preceded him in death: Evalyn Williams, Frances Wiley, Margaret Hazelgrove, Hazel Alsup, Donald Graham, Douglas Graham, George Graham, Laura Slover and Robert Hranac.