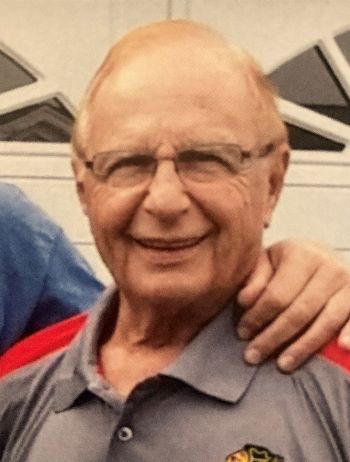 Ronald Joseph Caccamo, 88, of Huntley, formerly of Elmhurst, died peacefully in his home on November 12, 2021, with his family at his side.

Ron was born in Chicago on April 24, 1933, to parents Salvatore and Philomena (nee DeStefano) Caccamo. He met Constance Ferm when his cousin married her sister, and later asked her to spend the New Years with him. They were married on June 25, 1955, and spent the next 66 years together. Ron was a proud veteran of the United States Army. He was a loyal employee at Motorola and worked there for many, many years.
He loved baseball and was recruited to play for the Chicago White Sox. He grew up near Wrigley Field and loved to follow and cheer for both teams. When baseball season ended, he also loved to cheer on the Chicago Blackhawks.
He was a skilled handyman who could fix anything and loved to care for his garden. He was a wonderful man who got along with everybody. He will be greatly missed by all who knew him.

Ron is survived by his beloved wife, Connie Caccamo, his children, Paul (Kathy) Caccamo, Dan (Kathi) Caccamo, and Julie (Matt) Quinn, his grandchildren, Nick (Adrienne), Andrew (Brynn), Danielle, Olivia, and Matthew, his great-grandchildren, Jack, James, William, Audrey, Charlotte, and Clara, and his sister-in-law, Marsha Caccamo and by his brother-in-law, David (Molly) Ferm.
He was preceded in death by his brothers, Bill (Mary) Caccamo, and Ray Caccamo.

Dear Connie, Our sincere condolences. We were saddened by seeing that Ron had past but, while we didn't see him often, he was always kind and genuinely happy to see us. We will remember you in our prayers. Blessings to you and the entire family. Love, Cousin Jimmy

Uncle Ron and Auntie Connie were like a second set of parents to us while growing up . We have so many great memories that we have continued to share and laugh about over the years, Uncle Ron will be Greatly missed throughout this Family . God Bless

He was a great and kind man. He will be sadly missed and all will feel the loss. I am so sorry not to be with my second family in this time of grief. I am going through medical procedures myself and must stay here. God Bless and hope to see everyone soon

Hello , I am very sad to hear of Ron's passing. I worked as a sub-contractor for Ron at Motorola for 10 years. he was always a joy to be with. He seemed to always enjoy life. We had many great times together over the years. Ron came to my dads funeral 7 years ago and really made my day. Thanks Ron you will me missed. Bill Tegtmeier