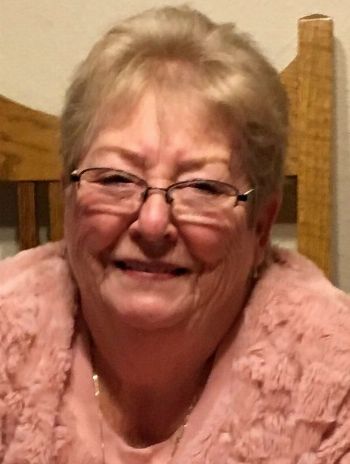 Charlene Ann Schumacher passed away on November 22nd, 2021 at home surrounded by family. She was born in Elgin, IL on February 5, 1947 but spent the last 25 years living her dream in Mercer, Wi. She is survived by her husband of 54 years, Dennis Schumacher, her daughter Stacy (Schumacher) Thomas and her son and his wife Brian and Jennifer Schumacher. Also surviving are 5 grandchildren, Kaitlynn, Madisyn, Jonathan, Jackson and Jason.
Although she didn’t know it at the time, Char met the love of her life in first grade at Carpentersville Elementary. Shortly thereafter, she moved with her parents and brother to Idaho. She had polio at an early age, which kept her bed bound for several months, caused her to walk with a slight outturning of her foot, as well as created the need for a full set of dentures at a very young age. After her parents divorced, she moved back with her mother and brother to Elgin, IL. Right after graduating from Elgin High School in 1965, Charlene got a part time job as an elf at Santa’s Village where she reconnected with Dennis, who as fate would have it, also worked at Santa’s Village wrangling reindeer. They fell in love at the North Pole of Carpentersville, IL. It’s no wonder that Christmas was always her favorite time of year. Every year she would bake a huge amount of Christmas cookies and send to each of her children’s families their favorites. She and Den would lovingly decorate the Santa and candy cane shaped sugar cookies together.
At barely 18 years old, Den went on to bootcamp and Charlene, upset that her boyfriend hadn’t proposed yet, moved to Florida to bask in the sun and hopefully forget about her childhood sweetheart. Den wasn’t having any of it. After graduating from bootcamp Dennis called Charlene in Florida and proposed to her on the phone. She drove back from Florida in a red convertible, eager to begin a family.
They married in a small church in West Dundee on March 11, 1967, just two years out of high school. Two years later their first baby was born, Stacy Marie, while Den was still serving in the Navy overseas on an aircraft carrier. As was often the case in those times, he received the news by telegram. He was soon discharged, and two years later came their bouncing baby boy, Brian Lee.
Charlene worked as a secretary in Student Records in Elgin at School District U-46 for nearly 25 years. She assisted in transferring school records for families moving in and out of the Elgin area. She loved the people she worked with, the hours, and mostly that she had a 5-minute commute to work and was close to home in case one of her children needed her. Dennis worked as a sprinkler fitter, and together they made a happy life together, not without its ups and downs, but happy nonetheless. They purchased a small cabin in Mercer, WI and spent the next 30 years planning and saving for their retirement. They put in multiple additions and improvements until that tiny little cabin was a warm and cozy home. With careful planning, they were able to retire at age 55. They hosted their grandchildren at different times during the summer, and often the whole family was up there for the 4th of July to enjoy the lake life, fishing, boating, tubing, horseback riding, and the boys’ favorite…go cart racing. Grandma would always have their favorite dishes ready when her grandkids were up.
Charlene enjoyed keeping busy, she liked to sew, bake, play cards, and spend time with her friends and family. In recent years, she had a lot of fun gambling at a nearby casino, playing bingo at the community center, and even joined a local Mahjong club in Mercer. Char was lucky to have found such a deep and enduring love with Dennis. She was blessed with many close family, friends and neighbors that helped her through her tough battle with cancer.
The family would like to extend a sincere thank-you to the friends and family and hospice that helped care for her through these last few months. As tired as she was, she was always happy to see someone had stopped by to see her. She was loved so very much, and will be so dearly missed by all.
Visitation will be held on Saturday, December 4th at 11am at De Fiore Funeral and Cremation Services in Huntley, IL. Service will be held at noon. A luncheon will be served immediately following at Brian and Jenn Schumacher’s home at 16116 Peregrine Trail, Huntley, all are invited.

I'm so sorry for your loss. Thankful to God for the restful place she is in now. Our thoughts and prayers are with your family.

May fond memories of Char bring you comfort during this hard time in your life. Our hearts and prayers go out to you and your family. We deeply miss her, and we pray for you. Her passing is a great loss for so many.

Many conversations and warm thoughts shared over the years...she will be in heaven preparing a place for all her loving family and friends. God keep you until then!