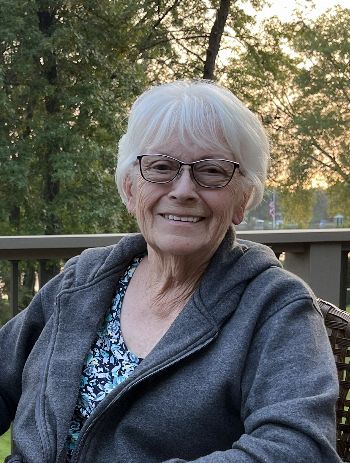 Linda Woods, 79, of Lake in the Hills, formerly of Arizona and Des Plaines, died peacefully on November 28, 2021, in her home surrounded by her family.
Linda was born in Chicago on May 29, 1942, to parents Oran and Dorothy (nee Kraemer) Rader. She married James Woods on February 1, 1964 and they settled in Des Plaines to raise their family. Linda worked as a paraprofessional at Maine West High School and after retiring she and James moved to Arizona. Linda moved back to Illinois following James’s death on April 26, 2014. She was very family oriented and was completely devoted to raising her children. She adored her grandchildren and would do anything for them. Many cherished memories were made together at their lake house in Rome, Wisconsin. Linda loved to read and could often be found with the newest murder mystery on her shelf. She was a revered cook and has hundreds of recipes written on notecards. She was a selfless woman with a beautiful smile that lit up every room she was in. She will be greatly missed by all who knew her.
Linda is survived by her daughter, Lauren (Tom) Liacone, her grandchildren, Nicholas (Patrick Sachaj) Liacone, and Michelle Liacone, her nieces and nephews, John (Marcia) Rader, Patti (Warren) Strum, and Ronald (Laura) Rader, Jr. and the beloved dogs in her life, Arlo and Logan.
She was preceded in death by her husband, James Woods, her brother, Ronald (Barbara) Rader, Sr., and her dog, Tucker.
Services for Linda were private at her request.
For further information please call the funeral home at 847-515-8772 or online condolences may be directed to www.defiorefuneral.com

Forever in our hearts. One of the funniest women, I have ever known!

Our sincerest condolences to the Liacone family we will all miss her beautiful smile and warm heart.

I am so sorry for loss of your Mother. She was a great neighbor and I will never forget the attention she gave me during my most difficult time. She will be missed. Rest in peace Linda.

We are missing Linda this holiday season and are so saddened by her loss. Please accept our deepest sympathy for your loss. We will miss her lively conversation and her caring friendship with our mom. Her kind and engaging spirit shines bright through the Liacone family. We will always cherish her memory.