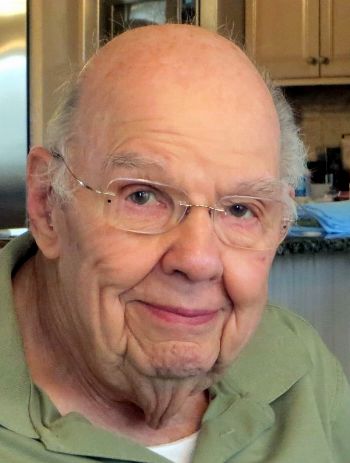 Raymond Harry Freutel, 95, of Lake in the Hills, died peacefully at his home on June 12, 2022, with family and friends by his side.
Ray was born September 30, 1926, the son of Fred and Louise (nee Huebner) Freutel. Ray graduated from Kelvyn Park High School in 1944. He proudly served in the United States Army and was able to maintain the rank of private his entire military career. He was a member of the AMON’s Social and Athletic Club located in the Kilbourne neighborhood. From 1948 to 1960, he worked for NBC. Because television was so new at the time, one of his duties was to unpack the station’s first TV cameras. At NBC he worked on classic shows such as Kukla, Fran & Olllie, Zoo Parade, Hawkins Falls, and The Wayne King Show. From 1960 to 1962, Ray and three partners formed Teletape, which was a mobile television unit. From 1962 to 1990, he worked at ABC/WLS-TV Channel 7. He worked on Wide World of Sports, College Football, Kup’s Show, Channel 7 News, and in 1984 he earned an Emmy for his work on the Los Angeles Summer Olympics. He also worked on AM Chicago and Oprah where he met his wife, Diane Henry. The couple married June 4, 1999. Ray was a kind, nice, and loving man who was quick-witted and a born storyteller. Ray was a frustratingly hopeful and loyal fan of the Chicago Cubs. He loved bowling, reading current events and history, doing Jumble puzzles, and listening to Dixieland music.
He was a loving husband, father, grandfather, and friend who will be missed by all who knew him.

He is survived by his wife of 23 years, Diane Henry Freutel, his daughter, Joanne Sperekas, his granddaughter, Kristen Sperekas and by his two great grandsons, Mason, and Ayden. He was a favorite and loving uncle to many nieces and nephews. He will be greatly missed by his beloved Miniature Schnauzers, Eddie, and Penny.
He was preceded in death by his parents, his first wife, Florence, and by his brothers, Fred, Ken, Vern, and Dick.

In lieu of flowers memorials in Ray’s name may be directed to JourneyCare Hospice Foundation in Barrington.
Per the family’s wishes, mask would be appreciated.

Diane and Family, Our deepest sympathy to you and all who had the great pleasure to know and love Ray . May your wonderful memories comfort you in this time of sorrow .

My condolences to Diane and Family. I've had the pleasure of knowing Ray for virtually my entire life as my father was a fellow AMON. Ray was a kind, funny and truly interesting man. I was fortunate to have the opportunity to talk to him last week and he was incredible, sharp as could be and stories intact. He was the last man standing of a very special group and will be missed by all!