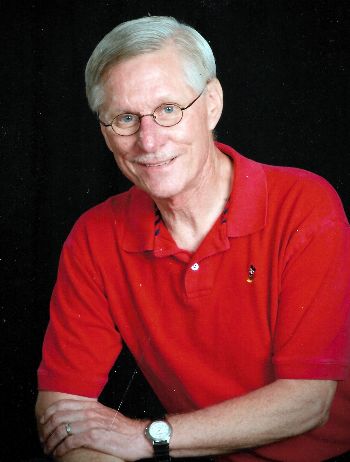 After graduating from high school in 1967, Tom joined the Navy. He served during the Viet Nam war years 1967 to 1969 as an aviation machinist’s mate third class. He was medically retired from the Navy in 1969.
Tom married Deanna Lombardo on October 6, 1979.

Tom worked at several animal health manufacturing facilities in Illinois, Kansas City, KS, Fort Dodge, IA and Saint Joseph, MO. in Supply Chain Management and Senior Manager in Production Planning. He retired in 2014 from Boeringer Inglheim in St. Joseph, MO. He returned to Illinois with his wife December of 2014 and was a resident of Del Webb/Sun City Huntley, IL.

In his younger years Tom enjoyed playing his guitar and banjo. Hel also enjoyed skiing in the winter. A favorite pastime of the whole family was camping. Since retiring Tom and Deanna camped down south during the winter months. His favorite sport was swimming. He belonged to the Stingray Swim Club at Del Webb. Tom was a member of St. Mary Church in Huntley and was a 4th degree Knight of the Knights of Columbus.

Visitation will be Friday, June 24, 2022, from 9 a.m. to time of Mass 10 a.m. all at St. Mary Church, 10307 Dundee Road, Huntley.
Mass will be streamed live on the DeFiore Facebook page: www.facebook.com/defiorefuneral
Inurnment to follow mass at St. Mary Columbarium.

In lieu of flowers, memorials in Tom’s name can be made to Veterans Path to Hope and Alzheimer’s Association.

We are so sorry for your loss. Tom was a very special person. Ed remembered the talks he would have with Tom in Destin and always commented how intelligent he was. Your family are in our prayers.

I’m saddened by your loss. We met Tom and Deanna earlier this year at Jamaica Beach RV. We enjoyed playing board games. Tom was alway smiling and friendly. Prayers for you during this time.

Please accept our deepest sympathies and condolences resulting from the unexpected death of Tom Hendren due to Alzheimer Disease. We will always remember Tom’s devotion to friends and family and was especially proud of having served in the Navy during the Vietnam War.

Sorry for your loss. Your family is in our prayers.

To the family of Tom, I would like to send my deepest sympathies to you. I had the pleasure of working under Tom, when he was with Boehringer Ingelheim in Saint Joseph Missouri. I am still employed there, and I work in the packaging and labeling department. I got to work with, and to talk with Tom many many times! He was a good man, he treated everybody with respect, always down to earth, always had a smile on his face. I pray that he was able to enjoy his retirement, before his illness incapacitated him. May God bless you, Hendren family.