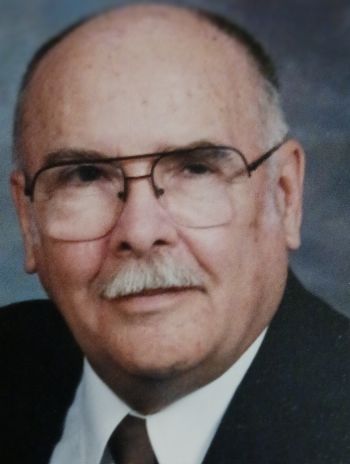 Lou Haskins, 95, of Huntley, IL passed away at home on Sept. 17, 2022.
Lou (LG) was born on April 8, 1927 in Knoxville, TN to Luther G. Haskins, Sr. and Mae (Miller) Haskins, baptized in the Presbyterian Church. After graduating from Knoxville High School in 1945, he went on to the University of Tennessee at Knoxville for one semester before joining the US Navy. He transferred from Great Lakes to University of Nebraska in ROTC, in Lincoln, NE. With an honorable discharge in 1946, he returned to U of N, earning a Bachelor of Science in Business Administration.
Lou met Rosemary T. Walsh at the Aragon Ballroom in Chicago. They married on a beautiful day in September 1950, at St. Patrick's Catholic Church in Rockford, IL, and had danced together ever since! They lived the first few years of married life in Des Plaines, IL, moving to Wadsworth, IL to raise their family. They made wonderful, life-long friends during these years.
Shortly after Lou's retirement from Akzo Nobel, Lou and Rosie moved to Dell Webb's Sun City in Huntley, IL where they made wonderful new friends.
Lou was an Eagle Scout, pilot, enjoyed dancing, camping with his family, gardening, international travel, and intellectual discussions on numerous topics. He was past President of the Chamber of Commerce of Zion, IL, on the Founding Committee for North Point Marina in Zion, and a member of the US Dept. of Veteran Affairs for the Blind.
Lou is survived by his children: Luther G. (Mary Anne) Haskins, Ill of Marengo, IL; Nancy (Bob) January of Wadsworth, IL; Patty (Jim) Bell of Kenosha, WI; Mary Beth (Steve) Collignon of Sunbury, Ohio; Mark (Vivian) Haskins of Vail, CO; Tom (Cori) Haskins of Beach Park, IL: and Kathy Meyers of Chandler, AZ; plus 17 grandchildren and numerous great-grandchildren. Lou was predeceased by his wife Rosemary, infant brothers Robert M. and George T., and his parents. We would also like to thank his wonderful Angels- Eun, Kim and Kathy-for their years of care for Lou.
Visitation will be held on Monday, October 3,2022 from 3-6pm with military rites at 5:30pm all at DeFiore Funeral Home- 10763 Dundee Road, Huntley.
Interment: Lynnhurst Cemetery, 2300 West Adair Drive, Knoxville, TN
For further info please contact the funeral home at 847-515-8772 or online condolences may be directed to www.defiorefuneral.com