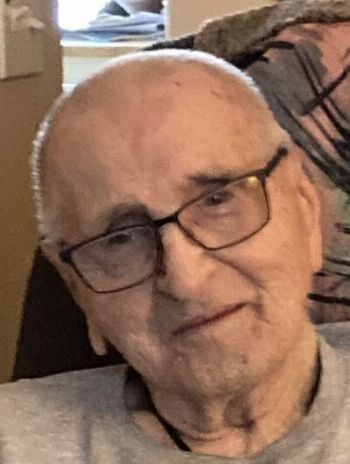 Charles Jelinek, 101, of Huntley, died peacefully at his home on November 17, 2022.
Charles was born June 13, 1921, the son of Louis and Estelle (Novotny) Jelinek. He proudly served in the United States Army during WW II. He was raised in Chicago and he married his childhood sweetheart on December 10, 1943, Anne M. Zindrick. The couple made their home in Carpentersville, and he worked as a machinist. In 2003 the couple moved to Huntley. Charles was a devoted husband, father, grandfather, great grandfather, great great grandfather and friend who will be missed by all who knew.
He is survived by his daughters, Linda (David) Goss of Crystal Lake, Susan (Andy) Pasilis of Orting, Washington, his sons, John (Elizabeth) Jelinek of Belvidere & Bruce (Celeste) Jelinek of Rockford, his grandchildren, James, William, Dustin, Sara, Amy, Emily, Jennifer, John, Amanda & Carrie, his two great great grandchildren. He was preceded in death by his wife, Anne, his daughter, Charlotte and by his siblings Bill, Cecile, Rose, and Ed. For further information please call the funeral home at 847-515-8772 or online condolences may be directed to www.defiorefuneral.com